Jonathan returns to health thanks to rehabilitation specialist

Home / Blog / Jonathan returns to health thanks to rehabilitation specialist

Meet Jonathan, a five-year-old hero thanks to whom we have a new rehabilitation ward in our Congo hospital.

He arrived to our hospital in January of this year in critical condition. Cerebral malaria had ravaged his body. He spent five days in a coma. We gave him a blood transfusion, drugs and put him on oxygen and did not leave his bedside. After a few days of fighting, we miraculously brought him back to life but the neurological changes from the disease turned out to be very serious. The boy didn’t move, had issues swallowing and limited contact with the surrounding world. We fed him with a probe, helped him get stronger and consulted his case with medical professionals whenever possible. Following a few days of helplessness, we received a visit from a physiotherapist from a neighboring hospital in Rutshuru to us. He wanted to be examined by our doctors  without knowing that they would show him a patient who miraculously survived cerebral malaria. He showed our nurses the exercises we should do with Jonathan, he told them what kind of progress we can expect and when, and how to change the intensity of the exercises. Sam could not come to us regularly, but he made sister Agnieszka look for a specialist who could join our team and support him in his work.

After a few days, we found Patrick in Goma, located a couple dozen kilometers away. Patrick is a young man with a degree physiotherapy who realized that he would not be able to make a living in Congo with this profession. Physiotherapists are like medicine here. Nobody seeks them out, so reality forces them to give up their dreams and change their profession. Patrick made a living with door-to-door trade, circling the streets of Goma. We hired him after just one interview. We knew that Jonathan needed help and we had no time to lose.

How this story ends? Jonathan can now eat, speak and walk. When he first walked out of the treatment room on his own, everyone was overjoyed and applauded him. Despite the fact that this rehabilitation took many weeks and involved a lot of hard work from both the patient and physiotherapist, news that we are miracle workers and that people rise from the dead at Ntamugenga spread like wildfire, and now people believe that physiotherapy is just like a visit to a shaman in the bush – the only difference being that it is actually effective.

It’s been six months. Patrick now works with us full time. He’s had several success stories  as impressive as Jonathan’s. He is a great fit for the team and works with anyone who needs his help. We have already converted one room into his office but for it to become a rehabilitation room, we need to equip it with the necessary medical equipment, which we desperately need.

It is thanks to your generous help that all of these amazing things are possible – Jonathan is alive and well (along with his appetite for sweets!), Patrick works with us full time, offering us new ways to help patients, and the smiles on his patients’ faces – all of this is thanks to you. By financially supporting our Congolese hospital, you allow us to deal with situations as difficult as the fight for Jonathan’s life. If you can, please support our new rehabilitation ward by paying for a day of Patrick’s work (just 20PLN!) 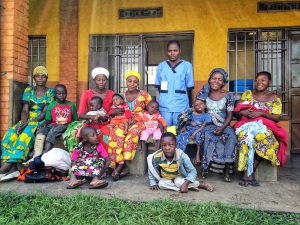 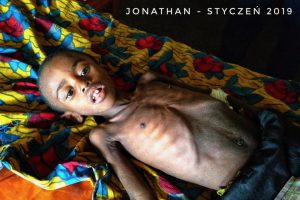 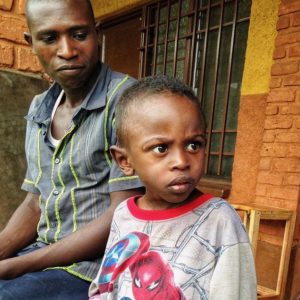