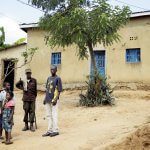 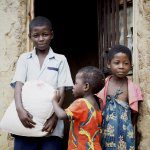 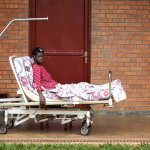 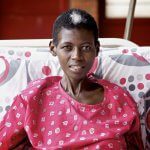 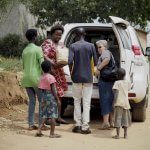 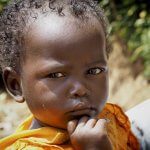 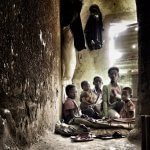 This is the story of Claire and her family. This thirty-five-year old mother of six children found out her life would fall apart shortly after she gave birth to her youngest daughter. And it did. Faster than she had expected. The dreams of rebounding together with her husband, fighting for the future of their children, were shattered as the doctor from the hospital in Kibagabaga communicated to her the sad news. Awful, heartless and cruel breast cancer. In an advanced stage.

Several weeks after the doctors confirmed their helplessness, discharging Claire from the hospital, she appeared at our hospice. She already couldn’t walk.

Before her illness, the young Rwandan lived with her husband and six children in a hut that could just as well be used as storage for brooms and other junk that’s rarely used. A small storeroom next to a house, of dimensions of 1.5 and 3 meters. The house is owned by a man, who let the family of eight members occupy his junk room for 10 000 francs (or 45 PLN) per month. Of course, there is no water, no kitchen or bedrooms. Eight people slept there together on the clay floor.

Nevertheless, this was not what troubled them most. For 2 months, they haven’t seen Claire’s only son, ten-year-old Nshimiyimana Adrien. Hunger made him walk out to the streets to search for food. He hasn’t come back.

When Claire was sharing with us the details of her family life at the hospice, our Angels: Ernestina and the sisters, knew in an instant what to do. Their conspiratorial gazes gave away what was going to happen next. The very next day in the morning, our hospice team and representatives of Good Factory went to visit the family. On the way, we stopped at the Kimironko market to buy some rice, oil and beans.